The PLC MAX H04 controllers are designed to perform a wide range of management tasks, technological processes, datalogging and data exchange. With GSM module for communication via GPRS, SMS and CLIP. Configurable color display and buttons

Ask a question about this product
The controller can be configured to operate according to a rigid algorithm, whose parameters and functions are set through the configuration menu, or as a programmable logic controller, whose work logic is determined by the application (in the ForthLogic language). Since it is a programmable logic controller, it is possible to define logic through an algorithm, but it is also possible to use pre-set functions such as operation via data logger. By acting as a device with a rigid algorithm, it is possible to define the command logic of the outputs according to the state of the inputs through a configuration menu, without therefore acting on the programming code. The device can notify one or more phone numbers when different conditions occur:   Logical operation on one of the inputs Main power loss Battery voltage drop to critical level     It is also possible to control the device via SMS and through a voice menu.   SOFTWARE The application program written in ForthLogic language can be loaded onto the device using a connection via serial TELNET. The applications written in ForthLogic are uncompiled script type programs. So there is no need for an environment to develop the code but just a simple text editor. Once the program is loaded and the device rebooted, it will cycle through it. SIGNALING LED   The controller has 3 LEDs: Green POWER LED to show the device power status Yellow STATUS LED shows the status of the GSM module. In the normal operating state the LED is on steady Red GSM LED shows the operating mode on the GSM network I/O   Input type Description  DI/AI1 ~ DI/AI4 Inputs configurable as "dry contact" digital or analog type 4..20mA or 0..10VDC DI5 ~ DI8  "Dry contact" digital inputs. The DI8 input can be used to connect devices with 1-Wire protocol. DO1 ~ DO4    "Open collector" digital outputs S1 ~ S3 Relay digital outputs MIC+   MIC-   Connectors for connecting a standard microphone DP    DN Terminals for RS485 serial connection +BAT Battery clamp +24V   Clamp for power supply GND   Ground terminal, used as a reference for all other terminals       The device uses the GSM module to send SMS or to receive calls and SMS and implement logic when certain programmable conditions occur.
Related Products 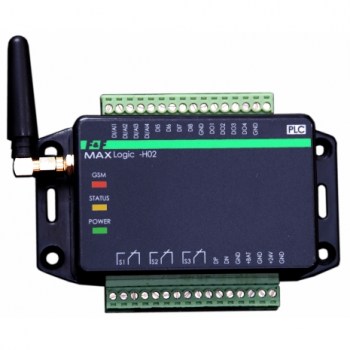